Following senior seasons that culminated in a District Championship, Troy Summers and Spencer White will continue their basketball careers at the collegiate level. Both signed National Letters of Intent this year, and will be staying in the state of Michigan to pursue their academic and athletic endeavors. 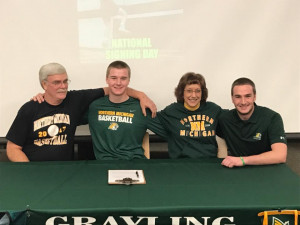 Troy Summers (left), who averaged 21 points, 16 rebounds and 2 blocks per game will be headed to Northern Michigan University this fall to compete for the Wildcats and Coach Bill Sall. Summers finished his career as the all-time rebounding leader for Grayling High School, and broke the single-season rebounding record as well. 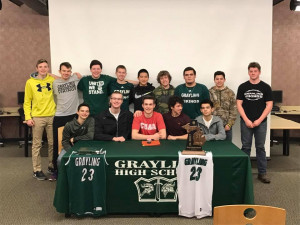 averages of 17 points and 6 rebounds per game will play at Concordia University of Ann Arbor for Coach Ricky Yahn. Spencer played point guard and wing for the Vikes, running the offense for a team that finished with a record of 18-6 and defeated Kingsley High School in the District Championship game.

You can stay up-to-date on Troy and Spencer by following NMU & CUAA’s athletic websites at the links below. Go Vikes!