The Grayling Varsity Wrestling team had three kids qualify for the MHSAA D3 Individual State Finals at Ford Field on March 6th and 7th and all three kids placed in the top 8 of their respective weight classes.

Junior Joe Armstrong was making his second straight appearance in the MHSAA State Finals and went 3-2 overall to finish 7th in the state in the 103lb weight class. Joe finished his season at 33-8 and was a conference champion, took second in districts and regionals and will eclipse the 100 win mark next season as he currently has 90 wins.

Junior Zach Duncan was also making his second straight MHSAA State Finals appearance and went 2-3 overall and finished in 8th place in the state in the 112lb weight class. Zach had a nagging injury all season that cost him the final two matches in the finals but still finished 39-8 on the season and was a conference and district champion. He also eclipsed the 100 win mark for his career this past season.

Senior Max Halstead was making his third appearance in the MHSAA State Finals and was coming off a 2nd place finish last season. Max went 3-2 in the state finals, with one of those losses coming to the eventual state champion, and finished in 4th place in the state in the 152lb weight class. Max ended his stellar high school career as only the second Grayling wrestler to be in the state finals three times. He finishes his career as a four-time conference champion, two-time district champion, one-time regional champion and has an overall record of 133-25. 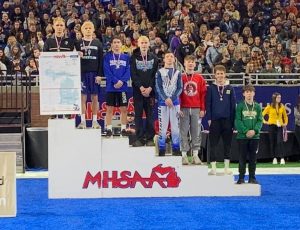 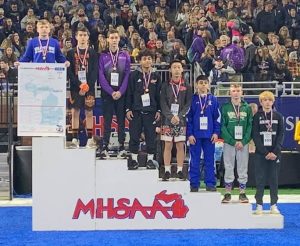 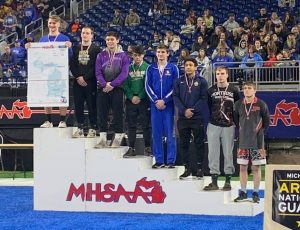